As I explained in Microservices: It’s not (only) the size that matters, it’s (also) how you use them – part 5, to me a service is a logical boundary that is the technical responsible for a given business capability.
This means that the service owns all data, logic and UI for this capability everywhere it is used.

What does it mean that a service is a logical boundary?

As explained in Philippe Kruchten’s 4+1 view of software architecture, we should not automatically force the logical view to be the same as the physical implementation or for that matter the deployment view.
This often means that a service isn’t a single implementation or deployment artifact.

You’ve probably read that a microservice should follow the Single Responsibility Principle (SRP) – it should do one thing and do it well.
If we align microservices with business capabilities, such as Sales, Shipping, Marketing, Billing, Policy Management,
then the microservices would most like be fairly big, which goes against many of the qualities we like about microservices, such as:

A large service is still individually deployable, but from a scaling point it’s typically all or nothing: either you scale the entire deployable unit or you don’t.

What if it is only certain use-cases that needed scaling? This is often harder with too big a deployable unit (what some people refer to a monolith) due to individual components inside the unit being too tightly coupled, like a tangled ball of yarn.

As explained in part 5 splitting services along business capabilities (or in DDD terms Bounded Contexts) has many advantages, such a Business/IT alignment, encapsulation and loose coupling.

The smallest responsibility for a component inside a service, is the handling of a single message/use-case i.e. either a Command or an Event. Personally I prefer dividing Services into components along transactional/consistency boundaries.

When we have decomposed a service into smaller implementation components, then there is no logic or behavior remaining outside of these components.
This effectively makes the service a logical container/boundary. The only  artefacts other than the components, a service has are its external schema/contracts (the commands, events, datatypes, etc. it exposes).

Are the components inside the logical service then microservices?

They can be!
One of the qualities that many people care about, when discussing microservices, is that they own their own data (i.e. have their own database schema/model), which can give us the ultimate degree of autonomy for microservices (as long as they don’t perform RPC/REST against other microservices).
But as you know there is at least 50 shades of grey and the same goes for shades of Autonomy.

The components inside a service boundary can share endpoints, resources, processes and other artefacts in many combinations. Here are some of the most likely: 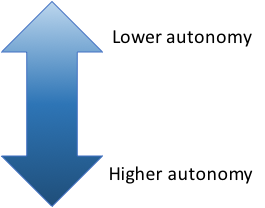 Going for full microservices every time is too dogmatic in my opinion.
We need to be pragmatic and case by case determine what solution solves the use-case best, where best involves time to market, price, changeability, scalability, future direction, etc.
There isn’t such a thing as a cookie cutter solution, sorry 😉

How should we split?

My rule of thumb is that we should strive to make our components autonomous, i.e. they shouldn’t  need to request data or call logical from other services/components using RPC/REST/… (i.e. using two way communication).
We should strive for them to interact only using Events.
We can perform RPC, e.g. for queries or *Commands, between components within the same Service boundary, but in this case we should consider co-locating/co-deploying them into the same process and use local calls instead of remote network calls.

In the next blog post I will show how we have chosen to organize our services/components/microservices/gateways/applications as code artefacts.

14 thoughts on “Service vs Components vs Microservices – part 6”